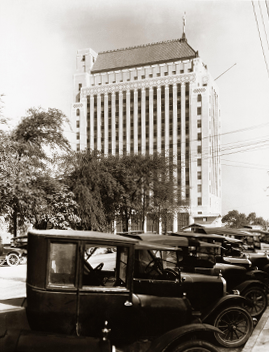 At the end of the 19th century, Alabama was an agricultural state where 90 percent of the population had no electricity. Houses were lit by candles or kerosene lanterns. Cooking was done over open fires or on wood stoves. Labor largely depended on man or mule.

Most people lived and worked on farms simply because there was very little industry in the state, which limited job opportunities.

But as the 20th century began, a few men had dreams of lighting Alabama and transforming the lives of its citizens.

When Alabama Power Company was founded on Dec. 4, 1906, it was the beginning of more than simply an electric utility company. It marked the beginning of affordable, reliable electricity that would transform Alabama's economy and vastly improve the quality of life for its citizens.

For more than 100 years, Alabama Power's history has been intricately linked with that of the state it proudly serves.

A third generation riverboat captain, Lay knew Alabama's rivers better than most. He also understood the state's rapids and shoals, which for decades had blocked riverboats, were ideal sites for hydroelectric dams. Lay founded Alabama Power Company on Dec. 4, 1906 in Gadsden. Although he had the vision and congressional approval to build a dam, Lay lacked the money to make that dream a reality until meeting James Mitchell. When Lay turned over control of the company to Mitchell in 1912, he did so with these words, which continue to guide the company today: "I now commit to you the good name and destiny of Alabama Power. May it be developed for the service of Alabama."

With no investment capital available in the state, and little interest from Wall Street, the electrification of Alabama could have been delayed for decades if not for James Mitchell. Born in Canada and raised in Massachusetts, Mitchell spent 16 years bringing electricity to Brazil before coming to Alabama. His ability to identify good sites for hydroelectric dams and opportunities for investors earned Mitchell the trust of London financiers, who agreed to back his projects in Alabama. Despite his key role in the financing of Alabama Power, Mitchell's goals went well beyond making money. As he put it, "To make money is all right; to build industry is fine. But to build an industry that saves mankind from toil which it can well be spared, that reduces the labor and drudgery of women, that provides leisure for education and culture - truly is a much finer thing."

Considered by many to be the most significant business and civic leader of 20th century Alabama, Martin's guiding philosophy was simple: Nothing can be good for Alabama Power unless it is first good for Alabama. A native of Scottsboro, Martin helped write the state's dam laws and was practicing law in Montgomery when he met James Mitchell. While Mitchell had the experience and financial backing to build a company, Martin provided an equally important skill: he was familiar with Alabama's unique political landscape and knew the right ways - and right people - to get things done. Martin understood that the growth and success of both the company and the state were linked. As such, Martin initiated projects that continue to benefit Alabama to this day, including the state's first economic development department and the independent Southern Research Institute, a diverse network committed to scientific discovery and technology development.

Developed for the Service of Alabama

“Developed for the Service of Alabama” is the story of Alabama Power Company, which is inextricably entwined with the history of the state it serves.

Check out the latest news from Alabama Power.

Stay in the Know